By now my feet know the feeling of stones (re)moving my progression as I try to keep pace on the beach in a constant search for the most solid surface. It not a secret that this is often close to the water or along the edge of the cliff. My only focus is the black and gray stones and where the next foot should be placed.

The chalk cliff rises above the sea, as a sharp contrast to the sky on a sunny summer day. The chalk is protected from the deep green sea by a narrow beach with stones of many different sizes. Impressive, beautiful and raw. A naturally magnificent setting and a worthy end to small and large races in the area. My body is tired and the thought of slowing down hits me more than once without it having any effect.

It is not until I see pictures afterwards that I discover how beautiful it actually is. 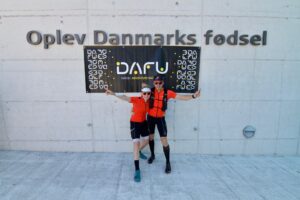 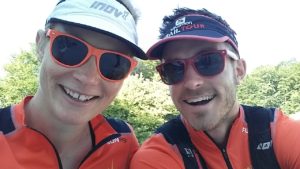 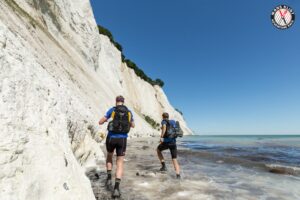 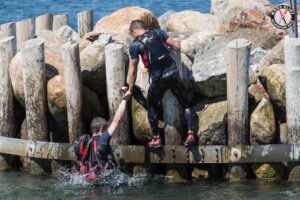 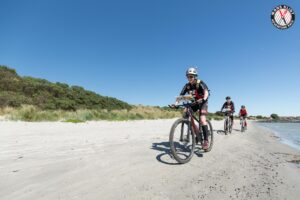 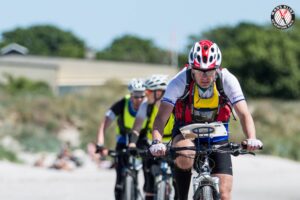 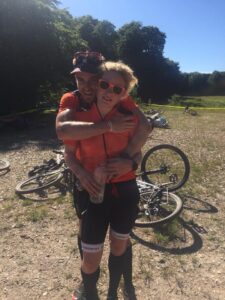 The place carries part of my race history. I had my Xterra racing debut on Møns Klint in 2015. Free of other ambition than to complete. Since then I have frequented this raw beach below the Chalk cliff on Møn more than once and the ambitions have grown steadily while competing in Offroad Triathlon and Adventure Race. I qualified for the Xterra World Cup on that beach. This weekend was the seventh time I was here to race and as always I had been looking forward to come back to one of the most magnificent places in Denmark.

Mentally I was not focused in the week before the race. Primarily because a close family member had said goodbye after 99.5 years. Sadness was combined with lots of good memories and thoughts about how I spend my short time on earth. Why do I tell it on a blog about Adventure Race? I do this because it (again) became clear to me during the race that Adventure Race and physical performance are about much more than being in good shape and putting one foot ahead of the other faster than the others.

I race with my boyfriend Tobias. It is great with a common passion and lots of shared experiences, but sometimes also difficult when you do not just hit the day, and the filter that is facing others is a little thinner in front of him.

Møn Adventure Race started at Geocenter Møns Klint in beautiful sunshine and good atmosphere with many familiar faces. A great way to spend the weekend in good company and with the prospect of another beautiful and hard experience. With a strong lineup of mix teams, there was no prospect of an easy victory.

The prologue took us into the Geocenter, where questions about dinosaurs, ice age and fossils were to be answered. We split up and were quick – we were first back in the sun and on the next stage. The race was planned as a star race with optional sequence of stages. We had discussed the optimal order in advance, so we went straight to climbing to avoid queuing. A cable car, vanity bumblebees and a short high robe track later we were on our way out on the next stage: Orienteering by foot.

Despite the good start, it did not take much time before our pace was too high for me – maybe more in the head than in the legs. I was not on top mentally and it contaminated the ability to run strongly. It required a time out and an adjustment of today’s ambition before we together decided to continue.

The route was “Møn Classic” with inflatable beach toys to reach CP’s located in the local lakes and on various peaks in the ice age hills. It is a nice combi for the legs with som nice swimming combined with steep climbs and down. And perfect way retrieving the good mood and focus to continue the race. The CP’s were as always on Møn exactly matched with the map, so it was entirely up to us to navigate properly.

The next stage was a long MTB-Orienteering trip with a short SUP element along the way. We didn’t quite get into the map in “Klinteskoven” and hit the first CP in a crooked way. When we finally found in the wrong direction, we met a competing team, which we would very much prefer to beat on their way. We got better into the map, but without the power of my legs, that I wanted. Mentally, however, it helped to get ahead, and I got more and more focused. We came out of the forest and through small villages and open landscapes towards Stege on Møn. Anders (the race director) is known for putting in some “funny element” and here he had been brilliant again. We had discovered that the card was inverted, but it still caused us a lot of problems and we lost way too much time.

The ambition of a top 3 ranking had more or less disappeared at this time and we had decided to enjoy the trip the best we could, when we were not able to race with proper focus and pace. But as everyone knows, an adventure race does not end until it ends, and it should turn out to be the case that day.

Back in the game

When we hit the SUP section, to our surprise, we met several competitors who were out on the SUP boards. We were obviously not the only ones who had been messing around for various reasons, and this realization provided us with new energy to compete. It is quite impressive what it does to you mentally, that one can see that the competitor is not quite far ahead. Suddenly my legs seemed much stronger as we continued.

We both gave it all we had during the three laps around the SUP track and were fast on the bike after the others. The first team we drove past quickly as they were hit by a defect on a bicycle for the second time. It only gave even more motivation for pace.

I had seen on the map that there was probably a bike passage along the beach on uneven ground, loose stones and sand. Clearly not my favorite. Last time we had met this kind of thing, I had pulled my bike most of the way frustrated and angry. I was clearly determined not to do this again, so with I I did everything I could to stay on the bike. It payed off and we overtook several teams along the approx. 5 km on the beach. It also took a lot of energy in the legs, which was replaced with plenty of gels, wine gums and bars. The last part of the bike loop was orienteering by foot in the hills overlooking the sea. Again, a Møn classic. Insanely beautiful, lots of small shrubs and tricky nettles with tricky CP locations. The CP were not easy, and my legs were tired, but Tobias did a good job with the map and it helped to hold his hand as it went uphill.

When we biked towards the last TA, we met one of our competitors who came running in the opposite direction. Again, it became clear that they were not far ahead. In the TA we met another team of competitors. They had responded incorrectly to a question in the prologue and had been given a sit down of 10 minutes. When we left the TA against the last running stage, “2 minutes” was shouted. This indicated our lead and suddenly we were in the competition again.

My ambition was to stay in front of the team in the TA – Tobias clearly did not settle there. He went for the win. Under no circumstances would I lose to the team we had just passed in the TA and tried my best to do the same. With sharp navigation and an ok pace, we hit the end of the beach by the chalk cliff. From here, Anders had planned a “delicious” final sprint with approx. 4 km return along the beach. I was hooked in the line to Tobias firmly focused on placing the feet the smartest possible in the loose stones. My entire body was hurting, and I could not see myself run all the way along the beach. More than once I mentioned this to Tobias. It was as if Tobias didn’t really hear it, as he continued in slow running pace. The beach twisted along the cliff, so you could sometimes see teams ahead or check how close they were. We couldn’t see any backwards – but in front of us there was at least one team.

It was a men’s team that we passed about halfway along the beach with tired smiles. It was now clear that our competitors were further along the beach, and we slowly but steadily came closer. Tobias’ goal was to pass by – I was just trying my best to keep up.

We reached them at the foot of another classic Møn feature – the stairs up the cliff. After a nice long race there is nothing you want more than approx. 400 steps upwards. It only gets better because you are two teams’ side by side, pushing each other to keep pace. It was long and hard, and we hit the top approx. simultaneously. From here, there was only one CP before the finish line with two different road choices.

Tobias left it to Casper from the other team to choose their route and we did the opposite – straight up through the forest without any clear landmarks for the CP. We arrived approx. 30 meters to the left of it but was corrected by Casper who came from below with direct direction towards the CP. Tobias checked the CP approx. 15 seconds before Casper and from there on there was only one way forward. My legs were empty, and Tobias have never been pulled so hard in the elastic. Casper and Gry were right behind us, but we kept the lead and continued slowly running up the last hill. Right there it is nice to know the terrain well! Looking over the shoulder I saw that they slowed down uphill, as we continued concentrated to keep pace all the way across the finish line. We got first over the finish line, me completely exhausted after the most cracey ending of an adventure race I’ve tried. The picture from the finish line shows it all.

It’s always great to cross the finish line as the first team – this day it was especially hard. It was certainly not our best performance, but all teams made mistakes that day or were hit by defects. Another reminder that an adventure race does not end before the finish line!

And by the way – next year Anders is hosting the Danish Championship in Adventure Race on Møn presenting an A-B master distance race. This is going to be really cool and I’ll definitely be there.